I Finally Understand What My Teachers Said

Hong Kong, 8th February 2018 Ever since I was a kid, all my social science and history teachers told me that Indonesia is a really culturally diverse country. Back then, I didn’t know much about other countries’ cultures, so I simply nodded to what they said.

Coming to Hong Kong, I started to learn how Chinese foods are different from one part to another. I’ve also met different Indian ethnic groups along my uni life who speak different local languages. So, I thought, hmm maybe Indonesia isn’t that special after all.

But, exchange changed my point of view and made me truly understand what my teachers said. Throughout my entire stay in the United Kingdom, I never knew what British local food is, except English Breakfast, pie and scones with tea. They basically eat sandwich and salad everyday. Similarly, for 9 days in 5 cities across Morocco, a country that famous for its beautiful tiles, I literally eat the same thing every single day – Tagine and couscous. As you might have guessed, at the end of the trip, I was sick of those food.

A lot of countries I visited have rich culture, like Paris and Netherlands, but the same cultures are reflected across the nation — most probably because of they are smaller in size. But Indonesia, the 4th most populous country with more than 17,000 islands, are culturally diverse from the west (Sabang) to the east (Merauke). Each of the 34 provinces has their own local food, language, traditional costume, dance, and folklore. 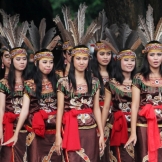 Last night, I was wearing Papua traditional costume to CityU Indonesian Night 2018. Some people asked if this is our traditional costume. I wanted to simply say yes, but at the same time, I don’t want them to assume that it’s the only one out of so many costumes we actually have. I realise it’s rather difficult to describe our identity because the only thing that reflect us is the diversity itself.

It’s true that India and China are also culturally diverse, partly because our size, but not all large countries are blessed with so many cultural heritage. It is both a curse and blessing to turn diversity to be our strength instead of something that tear us apart. My great grandparents may not originally came from Indonesia but I’m a true product made in Indonesia. Remember, we are Bhinneka Tunggal Ika — berbeda-beda tetapi tetap satu #UnityinDiversity 🇲🇨 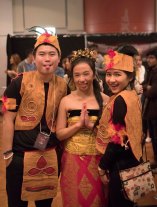