Shanghai, April 10 2016 Overseas conference has always been one of the best parts of my AIESEC journey because, beside meeting a lot of delegates from different nationalities, the energy you feel in a conference is tremendously overwhelming, equipped with a lot of inspiring stories. Here came Asia Pacific Conference (APC) 2016 in Shanghai.

To give you a glimpse of APC; it is an international conference for the presidents and vice presidents of AIESEC national and university levels to collaborate with each other to deliver a better experience and the delegates would not only come from one country but all over AP, and even US, Egypt and Australia! This would be a perfect ending of my AIESEC journey. So yes, I ended up submitting my application despite the conference will be held in the middle of crazy week 11. 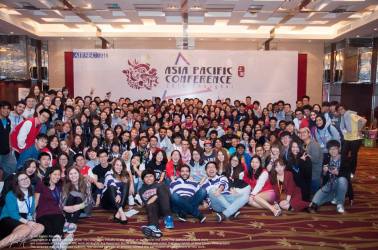 But hey, my excitement started to leave me alone few days prior to my departure, because I’m just a manager who has very few experiences compared to other delegates and I had this fear that most of the APC delegates would only want to talk about boring stuffs such as partnership and operation (which happened in the first day). I started to regret my decision.. Oh god, why did I even sign up?! But I guess, at that point, there was no way out, the ticket had been booked and the delegate fee had been paid.

APC was not as crazy as I imagined but it gave me little things that made these five days worth every penny I spent. The happiness was started by meeting AIESECers from Indonesia; all this time, I had always been curious about the change-makers from my own home country. It’s always more relevant to talk to them, discussing about the issues happening in Indonesia which I hope one day I can contribute too. 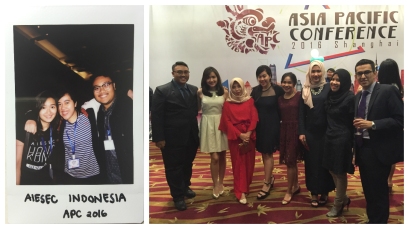 The happiness continued to the second, third and fourth day where I got the chance to listen to the keynote speakers from Apple, Lean In China, and many more companies. They all showed me something that I rarely find in people these days; passion. I was at this point in life where I thought finding your dream job is impossible because what matter are salary and the company image. However, they told me I was wrong that happiness and job can still come together. Besides that, the simple and random conversations I had with the delegates and facilitators taught a lot of things yet made me question so many things in life. There was even this point when I felt like I was going through a reintegration process of my AIESEC experiences that helped me to, finally, make it relevant to my life.

Here came the last day where everyone became so emotional when saying goodbyes and giving farewell hugs. At the end of the day, APC may not affect my AIESEC journey so much, like it did to many of the delegates, but I gain something more valuable than that. I learnt that when you were surrounded by people who were more experienced than you, instead of feel inferiority, you should use this chance to learn as much as possible from their stories. And sometimes, maybe conference is not about the content, but the people you meet, along with the network you build. Thank you APC 2016! ❤

“Surround yourself with people who reflect who you want to be and how you want to feel, energies are contagious.”