Thursday, 29 May 2014 3 days ago, a friend of mine informed me that we were going to Green Canyon. I couldn’t help but getting super excited. The whole trip was free because the purpose was to do a survey for Buddhist Reborn mid year event: Summer! Some people told me that Green Canyon and Pangandaran beach did not worth the visit. But, having been told so didn’t bring down my excitement because I had been dying to go traveling in this last 5 months of holiday and let me tell you about this place through my eyes.

As we got there, the fun didn’t begin instantly; after being equipped with life vest, helmet and something to cover our legs, we sat at the back of the truck (which we never did in Jakarta) heading to the starting point. Then we went down to the river through a rough path that stumbled me few times. I was sweating because of the hot weather but mostly because I was nervous. However, once you got into the river, the cold and fresh water swept away the fear and the excitement began.

The view was breathtaking, the trees were so dense making the weather so friendly, and the water was greenish but I guaranteed that it was crystal clear. We could float while capturing the beauty of the nature, spotting the sunlight that seek in between the branches and listening the sound of the water flowing down the river. For once, we felt like being in hunger games movie when Katniss Everdeen trapped in the forest and I couldn’t stop taking pictures because I wish moment like this last a little bit longer and more often. 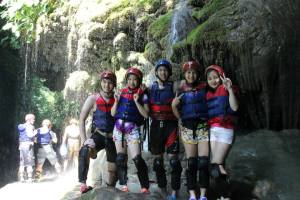 Most of the rocks are slippery, sometimes they could scratch your body but as long as you are careful, the journey would be safe and sound. When the river was shallow, we had to cross the rocks but most of the time we could just swim, or at least float. At some point of the river, we could choose to climb up a high cliff and jump from the height of 6m. I might be scared to death every time I climbed up but the thrill you felt once you were on top and the adrenaline that rush when you were about to jump were just so addictive. Sometimes, the boys and I jumped twice just for the sake getting the good pics

Oh! and there were 2 Australian guys, probably 50ish, joined our group and because the tour guide couldn’t speak English fluently, sometimes they asked me to become the translator. It turned out that my english was not so bad! #feelsocool. By the way, I was the only girl who was brave enough to jump from the cliffs several times, again I #feelsocool

These places might be not as beautiful as they were and be as developed as Bali or Singapore; the accommodations are very modest. But I’m telling you fellas, go adventuring and do something crazy while you still have the guts. Twenty years from now, while relaxing in Paris or Las Vegas, you’ll look back to your adventurous teenage life and wonder “how the hell I did that?”

“Don’t be a tourist, be a traveler”

PS: do not miss the Pangandaran seafood. They are so good!